Every Marine goes through two weeks of basic marksmanship training. Before they fire a single live round, they spend an entire week sitting in the grass, aiming at a white drum and squeezing the trigger until they hear the metallic “click” of the firing pin.
During this week of “dry fire,”

Marines re-learn how to breathe, sit, stand, kneel and squeeze – basics that each of us learned as infants.

Marines re-learn how to breathe, sit, stand, kneel and squeeze – basics that each of us learned as infants. But to be a great marksman, you have to do them with more focus and intention. Mastering fundamentals and having the discipline and mindset to apply the techniques is what leads to excellence.
Have you ever spent a lot of money on a website and had disappointing results? Did it fail to “accomplish its mission?” You probably had the right technology, the right server and a beautiful design.
But as the Marine Corps recognizes, what matters most is not the best rifle, but the right rifleman. Accomplishing your mission isn’t about having the prettiest website in the world, but about having a disciplined conversion optimizer with the right mindset applying proven techniques that lead to excellence.
The Marines are notorious for training excellent marksmen. They taught me how to shoot when I was 18. Almost 25 years later, I picked up an AR-15 and placed every round in the bulls-eye after my initial calibration shots. The discipline, techniques and mindset overcame 25 years of dormancy. Who is driving your website design? Do they have the discipline, techniques and mindset to deliver targeted, accurate changes? Or are they firing randomly into the wind like a Hollywood movie? 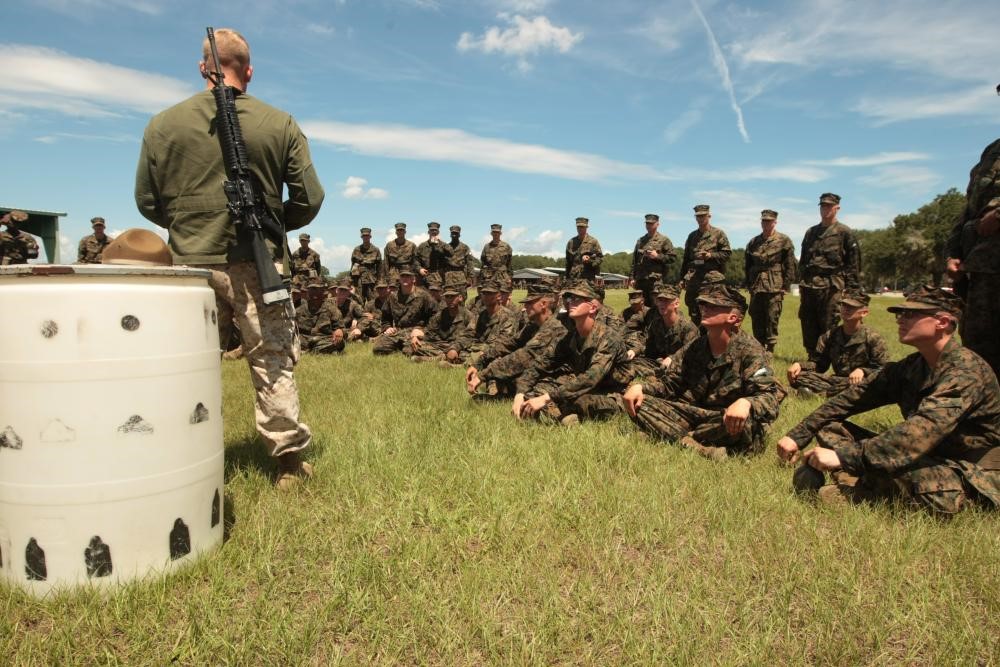 “Although equipped with the best rifle in the world, a unit with poorly trained riflemen cannot be depended upon to accomplish its mission. . . On the other hand, a well trained rifleman has confidence and can usually deliver accurate fire under the most adverse battle conditions. It is the latter who can best contribute to mission accomplishment.” – U.S. Marine Corps Rifle Marksmanship Manual

Patience Before You Fire

One of the challenges that faces online marketers is patience. As we work with our clients throughout a discovery process, their eyes light up as new revelations come into focus. Once a company has decided they want to invest in conversion optimization, they want to change everything and change it instantly.
We understand that excitement. But this is where you want to spend more time aiming than shooting. Isn’t that a paradox? In preparing Marines for a fast and chaotic environment, they continually teach the virtue of slow, well-aimed shots.

The slow, well-aimed shot is essential both to conserve resources and to be effective.

The slow, well-aimed shot is essential both to conserve resources and to be effective. Our focus is on having the discipline that leads to mission accomplishment.

The value of slow, well-aimed shots becomes clearer when you understand the math behind the situation. The M16 has an effective firing rate of 850-1000 rounds per minute. If you are firing rapidly (Hollywood style), you need to carry around 30 pounds of ammunition for every minute of rapid fire. As you can see, that load of ammunition quickly overburdens the rifleman trying to carry it, especially considering that most of those rounds don’t hit their intended targets.
The same is true for your businesses. Rapid firing changes to a website consumes enormous resources. With a majority of resources diverted to these scattershot changes, the essential business mission is in jeopardy. A seasoned conversion optimizer won’t rush a bunch of changes, but instead will take slow, well-aimed shots to maximize the impact.

A seasoned conversion optimizer will take the time to understand your customers, dig through your analytics, study user behavior and formulate the best strategy to hit your targets.
For example, once we form an initial hypothesis, we start working on a “B” version of the web page to test against the “A” version. Before sending the page live, we perform additional user testing on a number of metrics. One test we run, the “5-second test,” helps measure the clarity of a page among other things. More than once, we have caught issues that would have been detrimental and were able to address them before sending the page live.
All of these steps take time. But it makes sense to be patient if you want to see meaningful, revenue-generating changes on your website. Look for conversion optimizers who work like Marine rifle experts and take the slow, well-aimed shots. These are the people who will help you accomplish your mission.

In recent years, clients have been seeking guidance from allies4me on Social Media strategies. Rather than jumping on the latest hype, Andrews sought to understand Social Media through solid metrics across large data sets. The result is an unconventional and insightful approach to Social Media. Testing and data driven decisions advise all areas of allies4me work. Solid metrics and disciplined parsing of data is where allies4me clients find results. You can connect with Craig Andrews on Google+ and LinkedIn.  You can find allies4me on LinkedIn, Facebook, and Twitter.
Latest posts by Craig Andrews (see all)
May 5, 2015/by Craig Andrews
0 0 Craig Andrews https://conversionsciences.com/wp-content/uploads/2019/11/conversion-sciences-cro-agency-conversion-optimization-consultants.png Craig Andrews2015-05-05 18:38:472015-05-05 18:38:47Why Conversion Optimizers Should Think Like a Marine

What is Your Basic Unit of Upside?

Close the Conversion Gap. Cater to the Impulse Purchase

9 Motivational CRO Lessons You Can Learn from Ghostbusters
2 replies