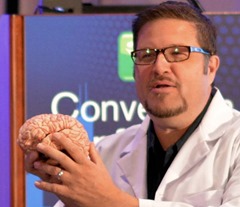 While I think we look smashing in our lab coats, I can’t say that I’ve ever thought of what we do as “Sexy.” Conversion Science is exciting, challenging and perplexing, a perfect combination for the trained and curious person drawn to this kind of work.
But sexy?
Writing in The Harvard Business Review authors Thomas H. Davenport and D.J. Patil think that the Data Scientist is the “Sexiest Job of the 21st Century.” Hmmm.
Are Conversion Scientists actually Data Scientists? Yes, they are — with a few important differences.
We’re looking for more Conversion Scientists. Are you a candidate? Find out

The HBR calls them “high-ranking professionals with the training and curiosity to make discoveries in the world of big data.” I hate the phrase “big data” because it implies that mortal humans can’t get their heads around it. Trust me. We can.
The two terms are relatively new. The term “Data Scientist” has only been around since 2008 when it was coined by the analytics brainiacs at LinkedIn and Facebook. “Conversion Scientists” was coined in 2006 by yours truly.
There is no degree program for either one of these professions.
Like Data Scientists, Conversion Scientists are hard to come by and we hope you will kindly send us a note if you’ve seen one in the wild. We’re hiring.
Davenport and Patil nail it when they say:

What kind of person does all this? Think of him or her as a hybrid of data hacker, analyst, communicator, and trusted adviser. The combination is extremely powerful.
But we would say the dominant trait among data scientists is an intense curiosity—a desire to go beneath the surface of a problem, find the questions at its heart, and distill them into a very clear set of hypotheses that can be tested.
And while people without strong social skills might thrive in traditional data professions, data scientists must have such skills to be effective.

Oh yah. That is a Conversion Scientist.

The authors of the HBR article state that “More than anything, what data scientists do is make discoveries while swimming in data.” This would not be sufficient for a Conversion Scientist. Sure we wade, snorkel and Slip ‘n’ Slide through data. But we must also create our own targeted data. This is most commonly done with testing.
We design creative tests for web pages, paid search campaigns, emails, and shopping carts.
It is important to both professions that we be able to communicate effectively. Discovering things is only helpful when those discoveries result in “new business directions.”
For the Conversion Scientist, these new business directions must head toward more leads and more revenue. We’re the capitalists of the Data Scientist community.
That’s basically how you afford your Conversion Scientists: They produce measurable upsides in business results.

Are You a Conversion Scientist?

Since there is no degree program, Conversion Scientists come from the worlds of search optimization, online advertising and performance marketing. They choose positions based on how interesting the data challenges they will be working with are and how much of an impact they will have.
Conversion Scientists are fascinated with the things we learn about human behavior through testing and analysis. So are businesses, as it turns out.
The authors also state that, “…the data scientists we’ve spoken with say they want to build things, not just give advice to a decision maker.” This is true of Conversion Scientists. They want to see the fruits of their labor, not just present reports on their discoveries.
Does this sound like you? Yes, we are looking for our next Conversion Scientist and this quiz will help both of us understand if there’s a fit.
[signature]

I want to talk to that developer you know

No More Guesswork: 5 Website Formats Proven to Get Results – via Crazy...
Scroll to top