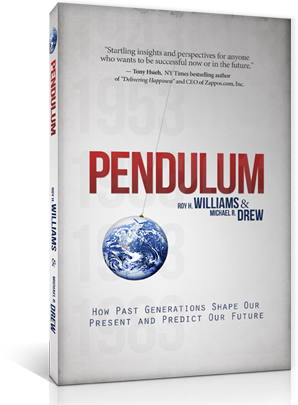 Get a FREE Hardcover Copy.

I remember the first time I heard about the strange “ad man” living in the hills outside of Austin where I live. I was told he was some kind of hermit genius, rumored to command a fee of $25,000 a day to tell companies how to communicate persuasively. This was perhaps 2004 or 2005.
Then someone shared with me a copy of The Monday Morning Memo, a weekly email that talked about the reasons our ads work. I subscribed and was soon drawn into a collision of two worlds; of the science of the mind and the art of literature and painting.
It was the same genius hermit, whom I would come to know as Roy H. Williams III.
Williams had begun to build an unusual business school in on ranch land outside of Austin. It’s a school that would fundamentally change my life and influence the way I communicate with the world.
The school seeks to teach its students how to do what great communicators and artists do naturally. The subjects are not typical business school fare.
The Magical Worlds Workshop
Da Vinci and the 40 Answers
Advanced Thought Particles
Third Gravitating Bodies
The Languages of the Mind
The name of the school was even more stopping: The Wizard Academy. Don’t worry. The school predated the Harry Potter series of books and movies.
It was here that I first encountered Bryan and Jeffrey Eisenberg, who’s writing and teaching would form the foundation of Conversion Sciences.
And it was here that I first heard Williams flagship presentation: The Pendulum. Williams’ used music, literature and historical events to paint Western society as the swinging of a pendulum, from individually-centered “Me” society to the communal “We” society and back.
Each swing of the pendulum was on an 80-year circuit, from the self-centered society of the Rockefellers and Vanderbilts at the turn of the century, to the GI society of World War II, banding together to save the world, and back to the plastic, individualistic society that spawned the likes of Disco.
It was a fascinating way to look at society because it seemed to give us the ability to predict the future. In fact, in 2004, Williams said “Let’s hope the American economy doesn’t repeat in 2009 what it did in 1929.”
It did.
I’m not sure even he thought it would look so much like 1929 as we found ourselves in a “Great Recession” in 2009.

While Williams’ Pendulum presentation focused on the current cycle from 1923 to 2003, his new book with Michael Drew looks back 3000 years for evidence of this 80 year juggernaut.
The evidence is compelling.
According to Williams and Drew, the Pendulum works like this:
We oscillate between a civic-minded “We” society and an individualist “Me” society. In a “We” it is important to be part of something bigger than yourself. Society will come together to achieve some great task or fix some great ill.
Then we get a little nuts, insisting on conformity and ostracizing those who don’t adhere to group norms. We see witch hunts and McCarthyism during these extremes.
Then the “Me” society begins to emerge.
The “Me” society rewards individual accomplishment. Freedom and self-expression hold sway until things get out of hand (again) and our culture begins to honor fake, plastic and posing behavior. This is when we’ve seen Robber Barons rule (1903) and we’ve hired an actor for President (1983).
And the pendulum swings back.
During each swing there are transitionary periods, heralded by “alpha voices” in technology, literature, art and music. They predict the coming shifts from “Me” to “We” and then back again.
In Pendulum, Williams and Drew use data on book sales, the Billboard music charts and trends in art to map the most recent swings. Each swing is sliced into ten-year periods, in each of which we behave in similar ways as a society.
They then use the writings of historical figures and accounts of past events to map this 80-year cycle back over 2000 years.
It’s the most interesting history lesson I’ve read in some time.
The last portion of the book is a transcript of a conversation about the coming years

Predicting the Future: What does this mean for our craft?

Currently, we are swinging from a “Me” society to a “We”. In 2003 the pendulum swung past bottom and is now headed upward to a society that will celebrate working together, but will inevitably require conformity and punish those that don’t play along.
An right on cue, we have found the tools to collaborate and to solve the world’s problems in the Internet and mobile devices. Fewer and fewer decisions are made individually. Our youngsters have made saving the planet a rallying cry. “Be Green” is the new “New Deal” of the last swing to a “We” climax.
For those of us that communicate, it means that we can no longer control the message. We can no longer manipulate the masses by appealing to their self-centered desires. The community is deciding more and more what is valuable.
Transparency and authenticity are necessary to work together. And soon conformity.
Conflict is already developing as we join our tribes and fall in line. We are taking sides. Republican or Democrat? Are you the 99%? Do you go to church? Do you go to my kind of church?
Just as Communism and Democracy began taking sides in 1922, so too did we start taking sides in 2002.
Williams predicts that we will be more and more willing to give up our privacy for the common good. In the end, it will be the revelations from this openness that allows us to begin excluding others.

If you are to believe Williams and Drew, then you will begin to create what Seth Godin (whom I believe to be an Alpha Voice in marketing) calls a tribe. As marketers, we must give our customers something to join, and a cause around which to rally.
We can no longer define ourselves by what we sell. We must stand for something.
Beginning in 2013, things start to turn nasty. As we swing higher to the Zenith of our “We” cycle, we will be tempted to exclude those that don’t conform to the rules of our tribe. it will become easiest to stand against something to keep your tribe in line.

Pendulum is a fun, fascinating romp through our recent history with a long glance back far back in time. You cannot read it without becoming aware of the way things are changing. You’ll begin to read the news with new eyes.
If you’re like me, it’ll scare you and excite you all at the same time.
Get ready to see your future.

Get a Signed Copy of my New Book